About this icon's image: A graduate student discusses his research at a poster during the Department's 2009 Graduate Research Day. The setting is the atrium of the new Psychology Building.

In 1951, the Department submitted a document titled A Proposed Program for the Doctor of Philosophy Degree in Psychology to the University's Graduate Council and the Board of Control. The proposal was approved, and in 1952 the Department was authorized to award the Doctoral degree.

At that time we were training students to the Masters level in Psychology and, decades earlier in the FSCW era, the first Masters degree in Psychology was earned by Effie Doane Pettit in 1912, as noted elsewhere in this Archive (In The Beginning - 1902 -1930). Setting up a new doctoral training program was a significant challenge and, as you will see from the historical documents available at the links below, the faculty of that time did an excellent job in getting the program underway.

The full text of the Department's original 58 page proposal for doctoral training can be found here in 5 sections, each with a short descriptor of the linked content.

Awardees are invited to return to campus for a few days and give a public lecture about their professional career and its relation to their graduate training, and to meet with current graduate and undergraduate students and faculty. A plaque with the names of awardees is located in the foyer of the Psychology Building. The Award program has been a popular event and provides current students with perspectives on varied career paths. In recent years, the award has become a feature of the Department's annual Graduate Research Day when current graduate students from all academic areas present their ongoing research. A list of awardees and their faculty mentor is provided here..

The Neuroscience Program's Distinguished Graduate Award: The interdisciplinary Psychobiology Program initiated an award program in 1979 to recognize some of its distinguished doctoral graduates. At that time, the Department of Psychology and the Department of Biological Sciences were the component departments in the Program, which subsequently was renamed the Program in Neuroscience. It has now expanded to include other departments (see "Histories of Psychology's Academic Programs" in this Archive, and http://neuro.fsu.edu/).

A Distinguished Graduate Award has been made in many years since this award was initiated, and graduates enrolled in all departments in the interdisciplinary program have received this honor. Awardees return to campus for a few days to give a lecture on their scientific career and meet with current graduate and undergraduate students and faculty. The Award program has provided current Neuroscience students with perspectives on varied career paths. The following complete list of recipients of the Distinguished Graduate Award since its beginning includes many students whose mentor was a faculty member in the Department of Psychology. The Psychology students who have received the award are highlighted in red in the list. Click here for a list of all Neuroscience awardees and their faculty mentor.

In the early 2000s, Daniel L. Hollar, an undergraduate psychology major, became interested in the racial and ethnic diversity of psychology doctoral recipients at FSU. No one had examined our doctoral program from this perspective. Daniel did so in 2003 in a Directed Individual Study project supervised by Michael Rashotte. The paper he wrote based on his research is presented below. It provides a detailed account of the racial and ethnic composition of our doctoral students between 1953 and 2002. Note: Daniel Hollar subsequently enrolled in the doctoral program in clinical psychology at FSU and earned his Ph.D. in 2010 under the direction of Thomas Joiner.

We also present the full text of a recruiting brochure prepared in 1973 to encourage African-American students to come to the Department for doctoral study, and an overview of a symposium held in April, 2003, at which several of our alums discussed their experiences and perspectives on cultural diversity in our doctoral program.

In 2003 the Department jointly celebrated its centennial on campus and its first 50 years of doctoral training. For that event a poster was prepared listing all students who earned the Ph.D. in those years. A facsimile of that poster is shown here.

Now, this list has been updated and put into a searchable table. Click here to reach our new listing of all students who have earned the Ph.D. degree in psychology from FSU, beginning with the first doctoral degree in 1953 and running to the present. This list is searchable by student name, graduation year, area of study, or major professor. It is an impressive list, now running into the many hundreds. If you are a doctoral alum of our program, you will find yourself and your classmates in the listing, some with email addresses. 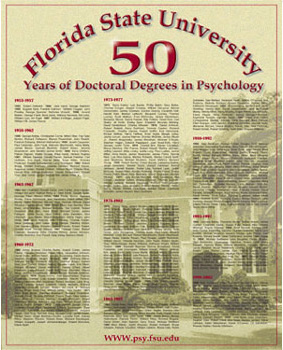